Now could be the best time in years to visit the incomparable Palais de Versailles!

Now that Macron has opened “toute la France” to business after the corona virus, it’s the best time in years to see the magnificent Château de Versailles. The bars and restaurants in France are now open, as well as the museums and major historical attractions, not least among them the Royal Palace of Versailles. Your passport for entry is now timed to allow for social distancing, so you are guaranteed the least crowded, most relaxed conditions ever for leisurely viewing this national French treasure!

This Week’s Blog Will Be Challenging!

This week we’re going to first briefly tell you about Versailles and its reopening in English, but after that we’re going to have you listen to a French newscast about the reopening and see how much of it you can understand at normal broadcast journalism speed. It’s pretty fast! You are likely to find it challenging, but we all learn the most when we are pushed a little out of our comfort zone, right? Then, after listening, we’ll ask a few questions so you can test yourself! And you might even win a free textbook!

The Château de Versailles, or Versailles Palace, was constructed, remodeled, and added onto over the span of many monarchs and many years, but the major portion of construction was commissioned by the famous “Sun King”, Louis XIV, or Louis Quatorze.

“2,300 rooms covering over 15 acres! Each night 10,000 courtiers and nobles sat down to dinner in the glittering halls of the Palace. ”

When you first glimpse the palace, you’ll be struck not just by its architectural grandeur, but by its utter enormity―2,300 rooms covering over 15 acres! Can you imagine? But even the palace itself is dwarfed by le Jardin de Versailles verdantly spreading out over 1,976 acres, richly populated with hundreds of statues, and the scene of much illicit court romance and intrigue. It’s one of the largest formal gardens in the world with almost 2,000 pools and fountains alone. Unsurprisingly, it’s a World Heritage Site. You’ll be shocked. There’s nothing like it.

Some 40,000 laborers toiled for over 14 years until completion in 1682, when Louis XIV finally moved the Court and the seat of government from Paris to Versailles. Each night 10,000 courtiers and nobles sat down to dinner in the glittering halls of the Palace. Unbelievable. 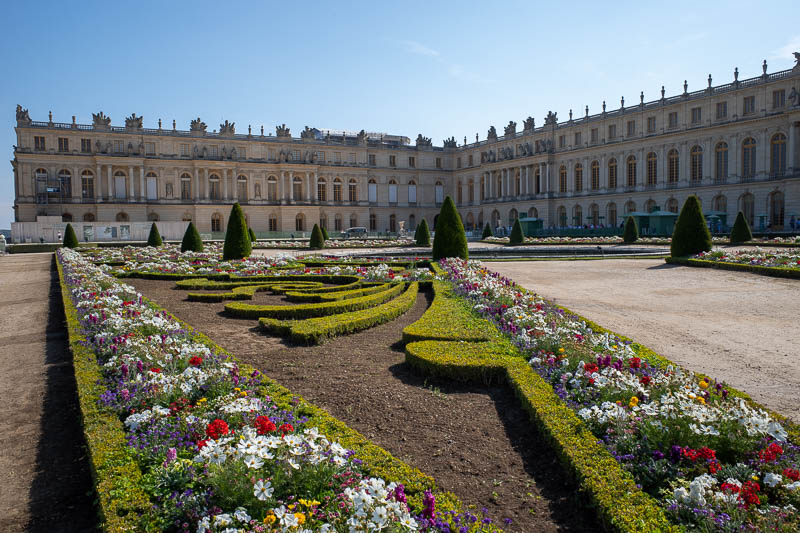 Well, there’s the Royal Chapel and the Royal Opera; the Kings Apartment and Marie Antoinette’s Private Chambers; the War Room and the Peace Room, but most famous of all is the long, magnificent Galerie des Glaces lined with 357 mirrors that proclaimed 17th century French primacy in mirror manufacturing.

Thirty painting compositions cover the high vaulted ceiling celebrating the political and military successes of the Sun King. The intimidating sense of French national power in the hall was so pervasive that foreign diplomats were forced to walk the entire length of the 239-foot hall (i.e. gauntlet), lined with court nobles on either side, to see the king enthroned on a dais at the far end. 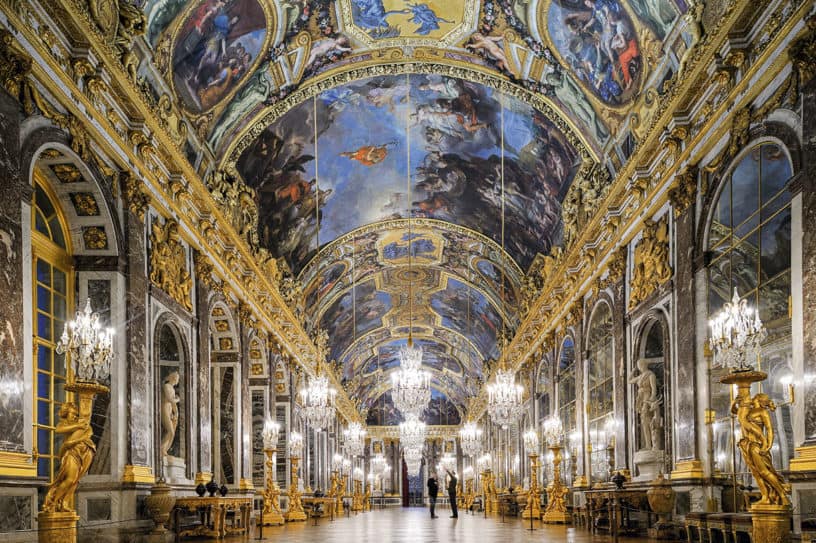 The Galerie des Glaces later became the scene of the signing of the Treaty of Versailles on June 28, 1919, marking the formal end of World War I. It's use as a royal palace ended with the French Revolution in 1789 and the fall of Louis XVI. Both Louis and his wife, Marie Antoinette, lost their heads in 1793 during the Reign of Terror (La Terreur).

Now Listen To This Newscast from France Inter

And Maybe You'll Win A Textbook!

So now that you know a little bit about Versailles, let’s listen to the following radio news broadcast from France Inter announcing the June 6 reopening of the palace after the Covid-19 shutdown. It was broadcast at normal French broadcasting speed, and it’s fast! Listen carefully―maybe even two or three times―and see if you can come up with the answers to the following questions. Even if you can only understand 50%, that’s an accomplishment! And probably that’s enough to answer most of the questions. Don’t be too hard on yourself! Take it as your challenge of the day! And if you get question #6 right, we'll enter you in a drawing for a FREE Instant French textbook!

1. How many visitors per year did Le château de Versailles have before it closed due to the 2020 coronavirus pandemic?

2. How many visitors per day did Le château de Versailles have before it closed due to the 2020 coronavirus pandemic?

3. How many visitors per day are now permitted in Le château de Versailles as it reopens after closure?

5. Associate these happy visitors to the reason for their happiness:

B. ___ Who came because the number of people allowed to enter is regulated?

C. ___Who is happy because she can visit freely the entire palace?

D. ___Who is happy because she can take pictures quietly?

6. What error of fact does the newscaster make when he is talking about Versailles?

Write your answer in the comment section or sent us an email to info@instantfrench.com!

If you liked this blog, subscribe or become a member by clicking on the Log In/Sign Up icon in the right upper corner. After signing up you can hit the down arrow in the Log In space to fill in your profile and upload your photo if you wish. You'll get an email notification and link for each new blog post. And, as a member, you'll be able to create your own profile, comment on blog posts, and make contact with other like-minded members. Become a member now! It's quick and easy.