Do you know the setting for the original story of Phantom of the Opera?

If you go to our beautiful capital, and, of course, if you like art and architecture, you’ll absolutely need to try at least one of our two grandioses opéras! But then, how to choose? Opéra Bastille, or Opéra Garnier (also called Palais Garnier)?

The two couldn’t have more different styles of architecture!

Of course! This is where the original story of the famous Phantom of the Opéra takes place! Did you know that?

Opéra Garnier, also called le Palais Garnier, is definitely one of the most magnificent buildings you'll ever see, a Parisian treasure from la Belle Époque, famous for its unbelievably over-the-top opulence in the Second Empire style.

Like most grand buildings, le Palais Garnier arose from the narcissistic dreams of a powerful leader, in this case Napoleon III, who in 1860 sponsored an architectural competition to design a truly imperial building―a new opera house―in honor of… himself, of course! From 171 entries, architect Charles Garnier won the contest and….well, in 1875 Napoleon got his imperial building, and happily, we have it too! It came in way over budget and took thirteen years to construct.

Passing through the famous Place de l’Opéra in the 9ieme arrondissement, you can’t miss this building with its exuberant baroque facade, every square inch of which is decorated with columns, bas-reliefs and dominated by sculptures gilded in fine gold.

“Inside, the opulence only grows. ”

Inside, the opulence only grows. A walk up the legendary Grand Staircase of Honor with its thirty monolithic marble columns will literally blow you away. The stairs lead to the majestic Grand Foyer, an enormous salon, or reception hall designed for Parisian society, where your first thought will be, “Where did all the money come from?”

The auditorium itself is equally sumptuous, crowned by a 7-ton bronze and crystal chandelier that can be raised or lowered. In 1896 one of the chandelier’s enormous counterweights broke free and plunged through the ceiling, killing a very unlucky concierge. 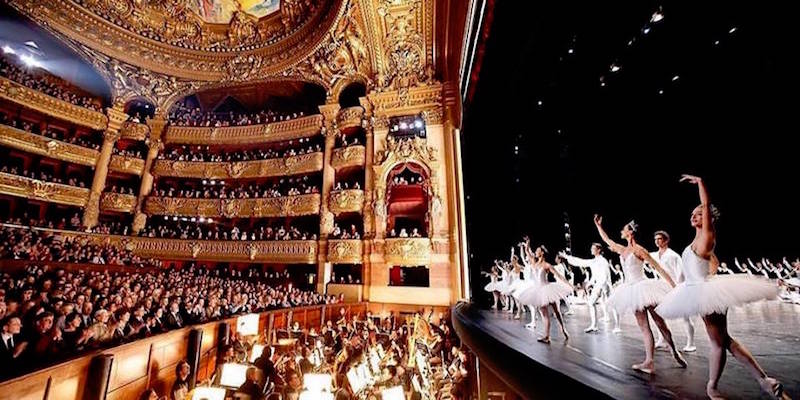 The majestuous ceiling of the performance hall was later painted in 1964 by the Belarusian artist, Marc Chagall, who lived in the south of France for nearly 50 years. The controversial ceiling painting is famous for being an incongruously modern work of art, right in the heart of this classical building, designed to pay tribute to fourteen great opera composers and their most renowned works (La flûte enchantée de Mozart, Le lac des cygnes de Tchaïkovski, Carmen de Bizet, etc.…) You can see many details of the operatic characters, Parisian monuments, and even Chagall himself in this work that encircles the enormous chandelier like a waltz or a farandole (a circular Provençal dance, holding hands)….wonderful!

An amazing venue, especially for ballet, but you will enjoy anything you see there! While you’re in the Palais Garnier, don’t hesitate to take the fascinating tour and learn more! You can take a quick look at this elegant edifice here. (1:39)

In 1981 the newly elected socialist government of President Francois Mitterand embarked on a massive project (les Grands Travaux) to construct a number of major new 20th century architectural monuments that would change the urban landscape of Paris in celebration of the 200th anniversary of the French Revolution. The emphasis of the project was to be on the arts and culture. Mitterand wished for the Grands Travaux to be his major legacy as president.

One of these grand buildings was the Opéra Bastille, improbably designed by Uruguayan-Canadian architect Carlos Ott, and completed in the late 1980’s. It was to be an enormous new opéra house of modern design that would address some of the shortcomings of the old landmark Opéra Garnier.

Quite ironic when you think of it, isn’t it? These arts, considered as being very “bourgeois” and upper class, being performed in exactly the spot where French commoners shed blood in the streets against the monarchy… such a provocation, one could say!

One of the justifications for building this enormous theater was that the increased seating capacity would help to “democratize” these genres of the performing arts―Opéra, ballet, and symphonic music, certainly favorites of Mitterand’s, but not necessarily the favorites of revolutionary French peasants. 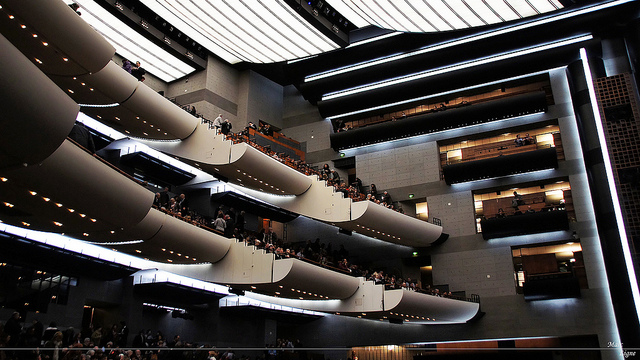 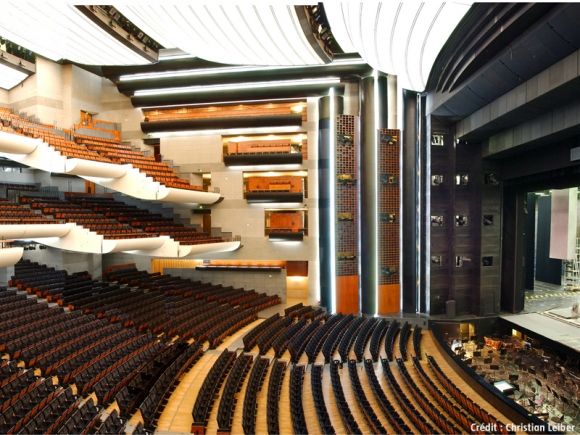 So Opéra Bastille is one of the largest theaters in the world with a seating capacity of 2,703, roughly equivalent to Isaac Stern Auditorium in Carnegie Hall. The hydraulic orchestra pit is equally enormous with space sufficient for 130 musicians, making the hall particularly incredible for opera.

Like the glass pyramid at the Louvre museum, Parisians are not unanimous in their opinion of this big building’s architecture. Some of them will tell you it’s awful and cold, while others would call it monumental; an architectural triumph. However, one thing is certain about the Opéra Bastille―its machinery is extraordinary. Some say it makes the Met of New York or the Bolshoi of Moscow green with envy.

“...one of the largest theaters in the world.”

The backstage is enormous―six times the size of the stage itself―permitting storage of four different sets the same width as the stage. A system of rails and a rotating dock (turntable) make it possible to roll entire sets on and off the stage on giant motorised platforms in a few minutes. A huge elevator allows sets to be lowered into an under-stage storage area as big as the back stage itself. These systems allow the venue to produce three completely different shows on the same date. It’s incredible and unique!

Also backstage is a large rehearsal room that duplicates the full-size stage and orchestra pit―a director’s delight! Definitely one of the best stages in the world.

So, if you are curious and you are not familiar with the opéra world, you are now well-armed to choose by the venue!

Please leave a comment to share with us your opinions about these two marvelous opera houses. And, if you like art and culture, you’ll love our Instant French Lesson 9 video, exploring music, impressionist painting, and sculpture during la Belle Époque. (12:30)

If you liked this blog, subscribe or become a member by clicking on the Log In/Sign Up icon in the right upper corner. After signing up you can hit the down arrow in the Log In space to fill in your profile and upload your photo if you wish. You'll get an email notification and link for each new blog post. And, as a member, you'll be able to create your own profile, comment on blog posts, and make contact with other like-minded members. Become a member now! It's quick and easy.